NSW Contingent to Sudan 1885
This uniform is of a Medic in the New South Wales (NSW) Ambulance Corps. Of the 700 volunteers raised in NSW that embarked for the Sudan Campaign, 34 were Ambulance Corps men.

The white blanco M1877 Foreign Service cork helmet was authorised for wear throughout the British Empire. This helmet has no puggaree (puggarees were authorised in 1900 Dress regulations after the Army Order 83 of 1896). It has a vent at the top and a leather adjustable chin strap.

The tunic is of khaki cotton cloth cut in the same style as the final Victorian-era Pattern 1881 British Army red tunic. This khaki tunic was specifically made for over seas service, with a high standing collar that secured with two hooks and eyes and also having two NSW collar badges at either end. The tunic has no pockets, which follows the 1881 style.
There were five blackened metal NSW embossed buttons extending down the front of the tunic.

On the right sleeve is a removable red Geneva Cross contained within a yellow circle worsted in thick cotton thread. This Medic Trade badge has four hooks that insert into eyes sewn onto the sleeve, so that the Badge can be removed for cleaning the tunic.

Over the right shoulder and resting on the left hip is a large buff white leather Medical Pouch. This would contain bandages and other items to administer first aid to the injured. 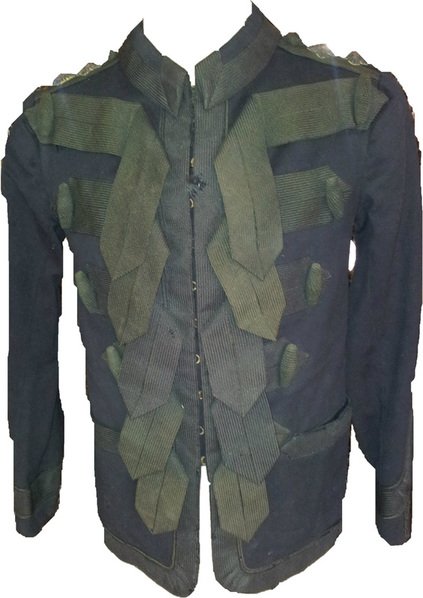 Surgeon 1889
This is a "undress" Patrol Jacket for a Medical Officer with the rank of Surgeon Lieutenant.

It is of dark blue melton wool fabric, having a stand-and-fall collar edged with black mohair braid. Hooks and eyes extending down the front to close the tunic and two mohair buttons to the epaulets. cascading down the front of the tunic are ten pointed black mohair lace set with black silk olivets.
Black Prussian braid indicating the rank of Lieutenant ornaments each cuff, and there are two worsted wire pips to the two epaulets.
On the inside of the jacket is black silk lining. 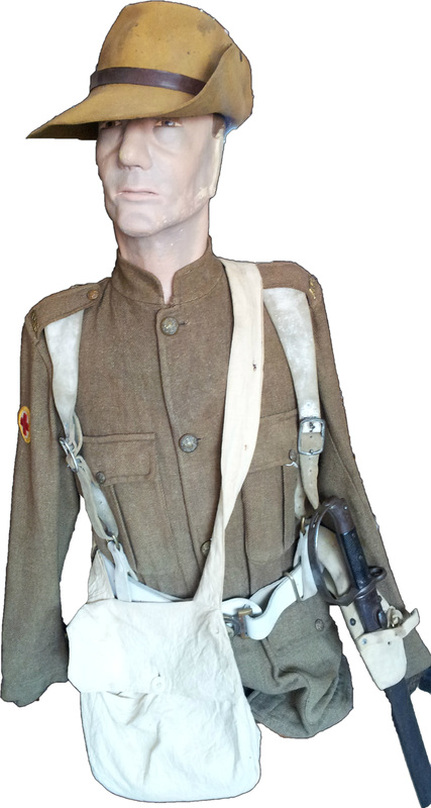 Boer War 1898 - 1901
This uniform is of a Medic in the South Australian Contingent in the Boer War.

The khaki felt slouch hat has a turn up brim and press stud on the left. There is a brown leather band around the crown

The tunic is a British 1899 pattern issued to Australian troops made of coarse khaki wool serge material, with a high standing collar. There are two box pleated breast pockets and two larger lower pockets, all with straight flaps.
All buttons are Queen Victoria Crown (QVC) general pattern extending down the front, the pockets and epaulets.

Sewn onto the right sleeve is a worsted Red Geneva Cross contained within a yellow circle, all done with thick cotton thread.

Other ranks 1888 Pattern (Mk 1) British Valise equipment (also known as Slade-Wallace equipment) is worn, and is made of Buff white leather. There are two (left and right) Braces over the shoulders that take the weight of the waist belt and attached equipment. For Infantry, the Braces attach to the back of two ammunition pouches, but for Medics, who require no ammunition pouches, there were two front suspension loops. The 2nd pattern 1891 waist belt has a large brass circular buckle with a QVC. A Bayonet Frog (Mk 1 General Service 1890) is on the left of the belt and has a P1878 Martini Henry Artillery Sawback bayonet that was issued to the Army Medical Corps.

Suspended over the left shoulder is a large white cotton calico Medics bag rests against the right hip. This contains bandages and other medical items to administer first aid.

The black fore-aft hat or bicorne hat has braiding along the crest and a gold and crimson wire tassel at both ends. On the right hand side of the hat is a gold wire braid terminating in a gold plated Medical Staff button. A black feather hackle is also inserted into the top of the right hand turn up.

The tunic is of fine red melton cloth with black velvet facings and edged with white cloth piping. There are no external pockets.  All the gold plated buttons extending down the front of the tunic have embossed the Queen Victoria Crown (QVC) and the words 'Medical Staff Corps'.
Both sleeves and collar have gold wire Prussian braiding indicating the rank of Lieutenant Colonel. There are two gold wire intwined cord epaulets and on each having a silver wire QVC and pip.

Create your own unique website with customizable templates.
Photo used under Creative Commons from a 1 u c a r d