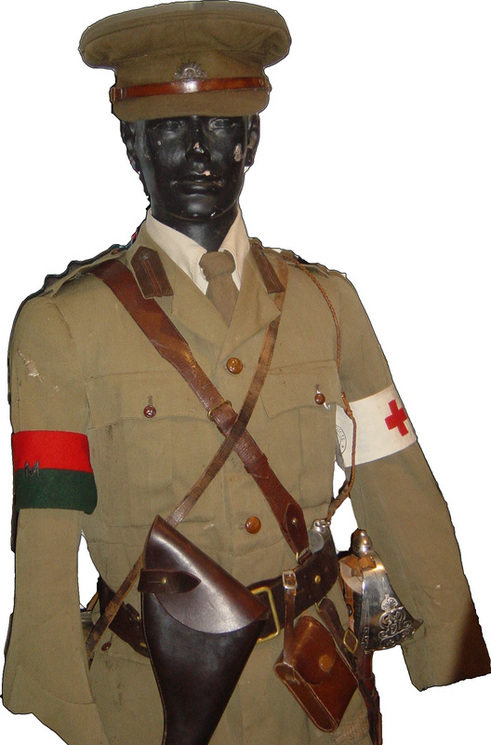 The officers visor cap is of barathea cloth which was very typical of the 1st Australian Imperial Force (AIF). It has a thin brown leather chin strap held at the sides by small leather plaited buttons, and a metal Australian Rising Sun badge is affixed to the front.

The khaki gabardine wool tunic is open collar and has four pockets - two upper box pleated breast pockets with scalloped flaps and two lower larger patch pockets with straight flaps. Both sleeves have an inverted 'V' cuff.
All the buttons are of pressed plaited leather extending down the front of the tunic, the pockets, and to both epaulettes.
The two epaulettes on the shoulders display his rank - having two metal pips indicating lieutenant, and the metal AUSTRALIA shoulder titles.
On either side of the collar are two gorgets of chocolate brown wool cloth having a central line of brown silk gimp, each terminating in a small metal Australia button. Gorgets indicated that he was a Staff Officer. Chocolate brown was the colour that designated the Australian Army Medical Corps from 1903 to 1931 (from 1931 onwards the colour was changed to Dull Cherry).

There are two brassards - One on the right arm being a Red over Green woollen brassard with a gilt wire embroider 'M' which signifies that he is a Medical Staff Officer; and one on the left arm which is a white cotton brassard with a sewn red wool Geneva cross. The wearing of a red cross brassard was instituted by the Geneva Convention in 1906. This indicated that he is a non-combatant and was afforded and entitled to protection from harm under International Law.

A brown leather Sam Brown belt is worn with a Webley revolver and holster, sword frog and 1897 Infantry Officer's Sword, and a camera slung on the belt. Medical personnel are permitted to be armed with light weapons for the purposes of self defence and the maintenance of order. A silver plated whistle on a brown leather plated lanyard and a water bottle resting on his right hip are slung over the left shoulder. 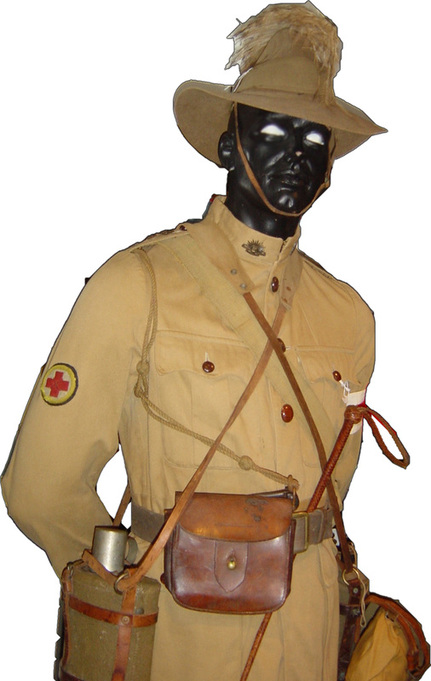 The iconic Australian Slouch Hat has a khaki pugaree around the crown and inserted behind this on the left hand side are Emu feathers. A large metal Australian Rising Sun budge is affixed under the left brim. The internal leather sweat band is maker marked and dated 1916.

The sandy coloured cotton drill tunic has a high closed collar with two metal Australian Rising Suns secured at either end. There are two pleated breast pockets with scalloped flaps.
Two epaulets have metal 'LH' for Light Horse and 'FA' for Field Ambulance.
All buttons are plaited leather extending down the front, the two pockets and the two epaulettes.
On the right sleeve is the worsted Medic Trade Badge and on the left sleeve is the white cotton brassard with the red Geneva cross.

A 1915 pattern brown leather belt with a large brass buckle is worn around the waist. On the belt is a large leather Medic pouch containing first aid supplies. A plaited brown leather ridding crop is thrust through the belt.

Slung over the right shoulder is a medical haversack resting against the left hip. This contains larger medical items such as large compression bandages and splinting material. A lanyard is also around the right shoulder which has the Light Horse multi tool at it's end (just visible behind the pouch.

Slung over the left shoulder is the special Medical Water Flask resting against the right hip with it's cup. This metal water flask was much larger than the standard water flask in order to contain an adequate quantity of water to quench the thrust of multiple wounded soldiers.

The Service Peak Cap is made from Officers quality doeskin wool fabric, having a brown leather chin strap and a large metal Australian Rising Sun badge affixed to the front.

The tunic is a 1902 Pattern Service Dress, tailor made in France during the First World War and was commonly favoured by Senior NCOs. It is made of fine grade woollen twill, having a high stand-and-fall collar with small metal Australian Rising Sun badges secured at each end, two box pleated breast pockets with scolloped flaps, and two lower large bellows pockets with straight flaps.
Two epaulets have a small metal AUSTRALIA title - this smaller version of the standard title was mostly used by Nursing Staff.
The quality of this tunic befits a senior NCO.
All buttons are pressed plaited leather which extend down the front of the tunic, all four pockets and to both epaulets.
A cotton worsted WO1 badge is sewn to the lower right sleeve, below this is the Medic Trade badge consisting of a thick worsted thread red Geneva Cross within a circle, and below that are four Over Seas Stripes indicating four years active service away from Australia. 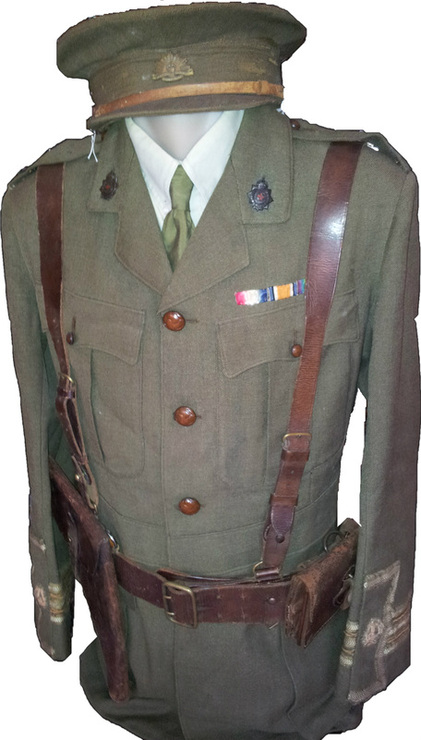 Pre First World War Australian Army Medical Corps Officers Tunic.
This is an Officer's pre-war cuff rank tunic, with the rank of Major. This was worn in the early part of the First World War.

The Officer's Service Peak Cap is khaki wool cloth with a narrow brown leather chin strap, and a brass Australian Rising Sun badge affixed to the front of the cap.

The tunic is of khaki wool serge with an open collar, having two 1906 pattern Australian Army Medical Corps badges attached to the collars. Their are two box pleated breast pockets with scolloped flaps and two lower bellows pockets.
All buttons are pressed leather that extend down the front of the tunic, all four pockets, and the two epaulets.
Two epaulets have metal 'AAMC' (Australian Army Medical Corps) shoulder titles.

The brown leather Sam Brown belt has the early twin shoulder straps. Attached to the belt is a small pouch of ammunition and a Webley holster.

Create your own unique website with customizable templates.
Photo used under Creative Commons from a 1 u c a r d